It’s time for the annual trek to SEMA, which starts next Tuesday through Friday at the convention center in Las Vegas.  Even during a bad economy, it’s a mob scene filled with exotic and over-the-top show cars.  To be honest, many of the cars at SEMA look just plain silly anywhere but this show, where everything on four wheels is competing for attention.  The Catfish is no different, and while our main goal was to debut the new windshield at the show, we decided to pump up the looks of the car just a bit.

Engine–we ordered a new 1.8  turbo exhaust manifold from Flyin’ Miata and followed their instructions for swapping a 1.6 for a 1.8 engine.  Essentially the 1.6 wiring stayed while the 1.8 mechanical bits were swapped.  It was straightforward and dropped right in.  The MegaSquirt MSPNP2 allowed us to change the engine and injector size, and we’ve already started driving the car around in “Auto Tune” mode, which essentially allows the car to tune itself.  This feature is really, really useful when you don’t have time to get to a tuner, or if you don’t want to spend upwards of $800 on a custom tune.

Windshield–this is the big one.  We worked with Dave Green at DG Motorsports to build a windshield frame the old-fashioned way…by hand.  We matched the hood width to a shortened Miata windscreen, but added a steep 30 degree rake to match the lines of the car.  It’s a very short and slippery windshield, with an incredibly STRONG frame.  The relatively inexpensive windshield–and the cutting process–will help keep pricing reasonable.  And last, IT WORKS!  Eye protection that was once mandatory is now optional.  Wind in the cabin is no more than any other regular convertible.

Hood–it’s shorter now, which means that it’s much easier to handle.  Aerocatch hardware still holds the front, and small Quik-Latches (U.S. made, patented) allow the whole hood to install quickly.

Roll Hoop Covers–Okay, these still need a little time in the shop, but we had them on hand so they’ll be at the show.  At this point the consensus is mixed regarding the aluminum covers.  They’re well made, but they stand out on the car.  Body colored or black covers seem to be a good choice.

Heated Seats–this car will be making its way up to Seattle in a while, and the best way to stay warm in a convertible is seat heaters.  Early morning blasts to Cars n’ Coffee or a late night drive home will be just a little more pleasant with a warm backside.

Stripes–SEMA is time time to show off, and we really liked the rendering that Zukun Plan did for the Catfish.  We think the stripes are really eye-catching, without being too “over the top”.  Jack Herrera at “Cars n’ Stripes” has been doing stripes for decades, and now his son Christian is helping with his transition from real pinstriping to top quality wraps.  It’s a great way to go.

What do you think? 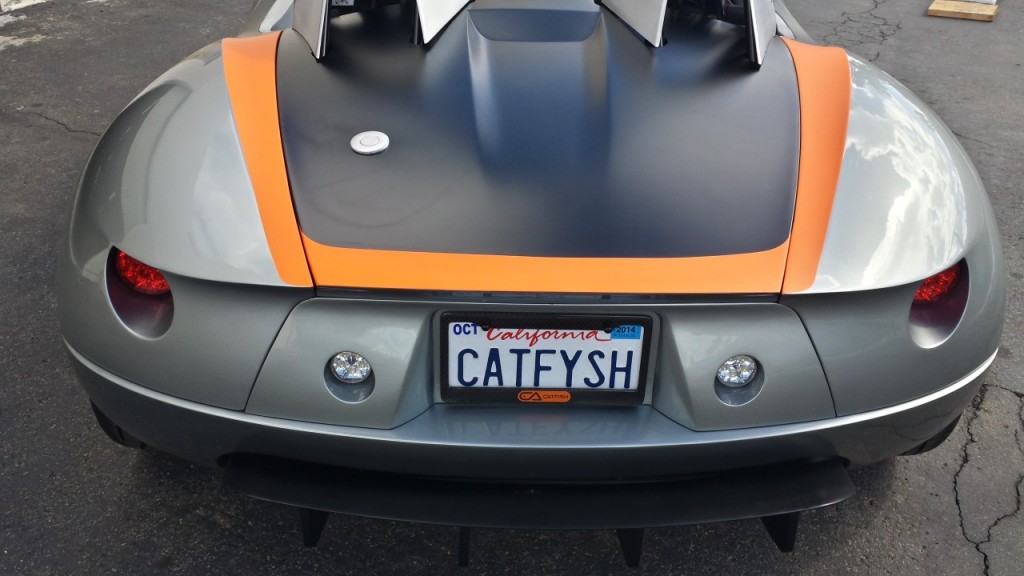 Stripes are nice, but this show is all about the windshield.

No stripes looks pretty good too!