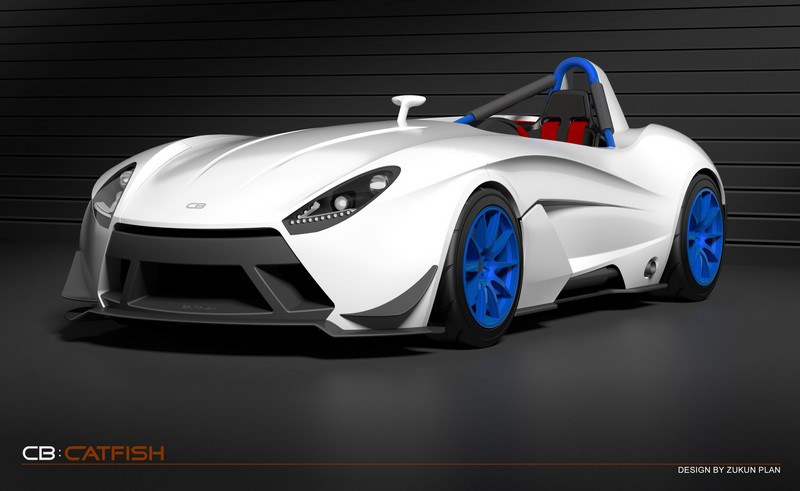 When the Catfish was still just an idea, the plan was to make two or three cars for the people involved in making the car–no more.  Building a one-off car is far easier than a production car–like building a clay pot takes an hour while making a tin can takes engineering, testing, meetings with vendors, buying the right assembly machines, and making sure it all fits, every time.  In fact the car went from a sketch to the halls of the SEMA show in less than a year.  When the decision was made to sell cars, tooling up for actual production took over twice as long.  2017 is now the year that tooling begins for the CFR.

This has always been the ultimate design, and was penned by Shawn Whetstone of Zukun Plan.  These “new” renderings have been around since the start.  There will be physical changes from this rendering, and that’s to be expected given that a lot of hands-on labor is needed to finish the body.  The original name was supposed to be “Apex”, for its cornering abilities and it being the ultimate design for the Catfish.  Right now the simple name is “CFR”.  Maybe we’ll call it the “CFR Apex” when it comes out…let us know which one you like best.

The design incorporates more aerodynamic tweaks, with an emphasis on downforce that doesn’t add excessive drag.  The new under wing helps add more grip to the back end, while massive air ducts on the side of the car suck hot air out of the engine.  The side barge boards also “train” the air exiting the engine to flow next to the bodywork.  The front end sees a splitter and whiskers (canards) set up to further add to the front end downforce.  It’s a purposeful look and yet still keeps the strong styling cues.

The first CFR is being built now by V8 Roadsters in Florida, complete with V6 LGX engine and 8 speed paddle shift transmission.  It will be wearing Mazda “Soul Red”, but will get a shake-down in bare white as seen in the last slide.  Stay tuned here, “Bauer Limited Production” Facebook page and at “Catfish_Racing” on Instagram as we release more renderings.

No new posts does not necessarily mean no new news. To get an insiders perspective just sign up for the newsletter.
[custom-facebook-feed]